Home 9 Blog Posts 9 Charleston Conference Notes 9 The “Law of Libraries”: What is a “library” Under the Law and Why Does It Matter?

The “Law of Libraries”: What is a “library” Under the Law and Why Does It Matter?

Kyle Courtney, Copyright Advisor, Harvard University said that understanding the laws relating to libraries is central. The laws generally fall into two categories: establishing and governing libraries, and defining the library’s mission, action, or power. Libraries predate many other institutions.. With the advent of digital spaces, they have evolved beyond their physical locations. Early library law related to the Library of Alexandria. The law at that time required ship captains to give the library their documents, and the library made a copy and returned the documents to the ships. Other decrees at that time empowered the mission of libraries. 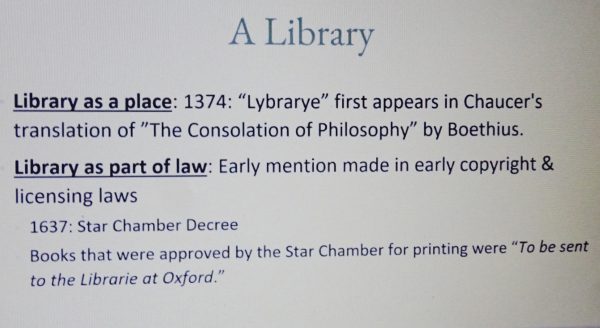 Later, libraries as a place were defined by the states (the first public lending library in the American colonies was established in 1698 in Charleston). In 1700, a state law was passed providing for public access which had many of the characteristics we have today such as funding, governance, lending to the public, fines, and maintaining records..  Today, every state has some version of a law adopting libraries. A typical law is that of Maine.This word cloud shows the main terms in that law. 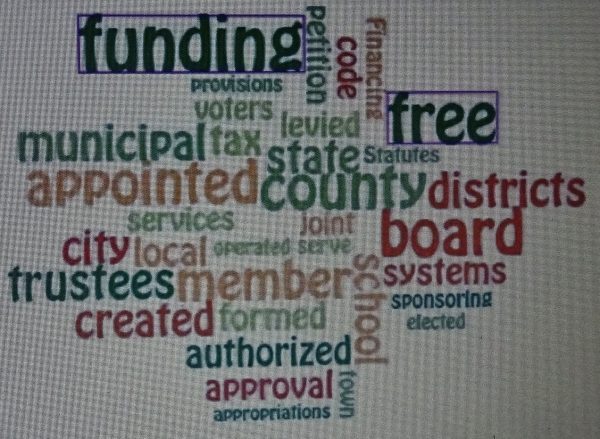 Federal laws discuss libraries representing the ideals of the First Amendment. US Courts have called them “the quintessential locus of the receipt of information”, “a mighty resource in the free exchange of ideas”, and “places that are dedicated to quiet, to knowledge, and to beauty”.  The E-Rate Program under the Library Services and Technology Act (LSTA) includes these types of libraries and defines their governance.:

The CASE Act in Section 108 has been used for defining the “library opt-out” exceptions to copyright in which the library does not have to deal with the small claims court within the Copyright Office. To receive this benefit the libraries must define themselves and submit a signed statement that they satisfy Section 108.  Here are some reasons why these laws matter.

The legal definition of a library is expansive enough to include the establishment of new types of libraries.

Some Issues to consider include Is the Internet Archive a library under the law even though it has a physical location? What about a completely independent digital library that lends materials (which is an impetus to create new libraries) if it satisfies Section 108. Generally, nonprofit libraries (like academics) are not subject to taxation.

Music Library Association Opens Publications at Internet Archive According to Caralee Adams and the Internet Archive Blog "For librarians who specialize in caring for music collections, it can be challenging to keep up with the latest technology and resources in the...

OCLC releases more than 150 million WorldCat Entities as the foundation of a linked data infrastructure Citing an OCLC press release, Library Technology Guides reports that "OCLC has completed a project, funded in part by a grant from the Mellon Foundation, to...