v30 #3 Out with the Old, in with the New: Making Space for a Digital Studio in R. M. Cooper Library

Large Space reclamation and repurpose projects occur with some frequency for many academic libraries.  Yet, not much is available in the literature that addresses the process part of the work. What are the challenges to consider?  What kind of planning and preparation are involved with organizing a project? Who are the stakeholders involved in a discarding and relocation project?  This article revisits a 2014 large-scale discard, relocation, and shifting project in the R. M. Cooper Library at Clemson University.  Clemson University is a Carnegie R1 academic research institution.  The University Libraries played a vital role in helping achieve that level of national recognition.  From 2010 to 2014, the University Libraries went through a series of organizational changes to reprioritize staff efforts to improve student outreach, develop pedagogical and research support technologies, and enhance the student library experience.

The University Libraries forged new partnerships with Clemson Computing Technology & Information (CCIT) and the Adobe Systems, Inc., which paved the way for the development of a digital studio on the fifth floor of R. M. Cooper Library.  By the spring of 2015, Clemson became the first university to provide all students, faculty, and staff full use of the Adobe Creative Cloud Suite.  The Adobe Digital Studio included audio and video production rooms to provide students with opportunities to develop their digital production skills and the technology to use them.  Planning to clear and repurpose the space began in early 2014. A deadline for early December was set for completion of the deselection and relocation of over 45,150 monographs and serials, clearing shelves in a 2519 sq. ft. (234 meters) area.

The purpose of this article is to describe the process involved in successfully completing a massive discard and relocation project in a 14-week period, from August to November 2014.  Four members of the Technical Services & Collection Management Unit and four student workers were assigned to what became known as the “Fifth Floor Project.” Approximately 10,000 serials were relocated to the high-density stacks at the Library Depot, an off-site legacy print storage facility, nine miles from the main campus and another 15,000 volumes were discarded and sent to the University’s recycling facility.  The remaining monographs and serials were shifted into the main collection on the fifth floor of Cooper Library.  The coordination and speed to complete this work served as a template for future large-scale discarding and relocation projects.

Past discarding, relocating, and shifting projects were assigned to ad hoc teams from various library units.  This approach worked well for short-term objectives, although a major drawback was each new team needed to reinvent the process or had to rely on previous institutional memory.  This project offered an opportunity to change strategies and look towards developing consistent processes to manage future projects with a team dedicated to that type of work. For this specific project, the eScience Librarian reviewed serials from the targeted area.  She created a spreadsheet, identifying low to non-usage serials to discard or relocate to high-density storage, depending on their value to the Library’s mission. Students and staff shifted the remaining serials and monographs back into the main collection. This meant we would select serials beyond the immediate target area for shifting purposes.

The objective was to discard, relocate, and shift approximately 45,150 print volumes, representing call number ranges from Q to QA, from Cooper Library’s fifth floor between August and early December.  Serials were the majority of the collection designated to discard and relocate. The Dean of Libraries had conveyed the need to have the space cleared by December for contractors to build the Adobe Digital Studio beginning in January 2015.

The eScience Librarian prepared for this project by creating a spreadsheet to review a list of serials, call number range from Q1 — QA901 in the affected area.  The eScience Librarian emailed the spreadsheet to the Project Coordinator with her final decisions to discard, relocate, or keep in the stacks. He then uploaded and shared the spreadsheet into Google Sheets with his team.  This online spreadsheet served to maintain the team’s progress in “real-time,” as well as help identify, track, and troubleshoot any issues developed during the course of the project. The Head of Facilities, provided signage around the affected area alerting patrons of the noise, dust, and traffic.  The Project Coordinator sent announcements to alert library staff about the project and to prepare for any patron questions.

Each library deselection and relocation project presents their own unique problems to solve.  The main issues of this project were:

Student workers were hired, in late August, to assist in the project.  Cooper Library had a large room recently vacated on the third floor, previously occupied by Acquisitions before it merged with Cataloging and relocated to the Library Depot.  This room was in an ideal location, next to the Mail Room and a staff entrance to a loading/unloading zone on the west side of Cooper Library.  Two ranges of shelves were installed in the middle of the room, along with six-computer workstations set up to process materials.  There were 14 book carts, of various sizes, assigned to this project. The Libraries’ courier service was through a non-university agency.  The Libraries Associate Dean renegotiated the contract, to accommodate the temporary increase of materials relocating from Cooper Library to the Library Depot.  The courier service agreed to transport ten plastic bins in the morning and ten more in the afternoon between locations.

The Project Coordinator set a collection schedule with University Recycling, which included the use of 10-rollout carts that could hold 350 lbs. of material.  Two staff members at the Library Depot received and accessioned all the materials sent from the Libraries. The plan was to create a manageable supply of processed materials for relocation to the Library Depot, as well as send discarded serials to University Recycling.  The major challenge was not to overwhelm any one group, which could potentially result in unwanted delays. This required constant monitoring by the Project Coordinator on all aspects of the workflow process and continual communication with all project stakeholders.

Once everything was in place, the team began their work.  The project began slowly, until everyone became accustomed to the process.  Staff paired with student workers to pull and process the serials and to shift the remaining print into the main collection.  The Project Coordinator filled in where staff and student workers were unavailable to work their assigned shifts. This flexible schedule helped to maintain a constant flow of materials from the shelves to their final destination.

Students worked 10-20 hours each week, Monday-Friday, from 8:00 am to 4:00 pm, in two to four hour blocks of time.  Once in the morning and in the afternoon, students and staff removed 150-200 serials volumes from the shelves, processed, and sent to high-density storage.  Each morning, students and staff followed a similar process to remove 300-400 serials volumes from shelves to the recycling rollout bins. Students rolled the full bins to the east side of Cooper Library, where University Recycling picked them up.  Clemson University Libraries utilizes Innovative Interfaces’ Millennium Integrated Library System.  Staff and students followed strict guidelines in processing library materials in the Millennium catalog module.  Staff updated item records through a combination of global changes in the Millennium catalog module. Staff updated each bibliographic record and holdings statements at the end of the process.  At any one time, two to four computer workstations were in use. Staff members updated the Google Sheets document as they completed changes in Millennium. Students pulled serials from shelves, verified barcodes with their assigned staff member, and then filled a recycling bin or a courier bin.  Staff flagged items not found on the shelves in the Millennium item record with a note to send to the Standards Management & Assessment Team. This helped to reduce time searching for materials that may have been misshelved or lost. Staff did some database maintenance during processing, with the Standards Management & Assessment Team troubleshooting larger database issues.  Working in conjunction with other teams helped achieve a constant flow of materials without slowing the entire process down.

Everything depended on speed and efficiency.  Most days, everything worked smoothly with a few exceptions.  Early in the process, it became apparent that both the courier and the recycling staff were fatigued at the volume of material they were collecting.  Simple changes in both processes helped to minimize these problems. Students packed and weighed each courier bin to approximately 35 lbs., before placing them in the Mail Room.  At times, it did create some awkward packing with as few as four volumes placed in a bin. Students filled the recycling rollout bins to approximately 66% capacity, before taking them outside for pick up.  This simple change reduced the weight in the bins to roughly 300 lbs., making them easier to move. Staff easily overcame these and other minor roadblocks and the team completed the project three weeks ahead of schedule.  Construction of the Adobe Digital Studio began in the spring of 2015 and officially opened that fall. 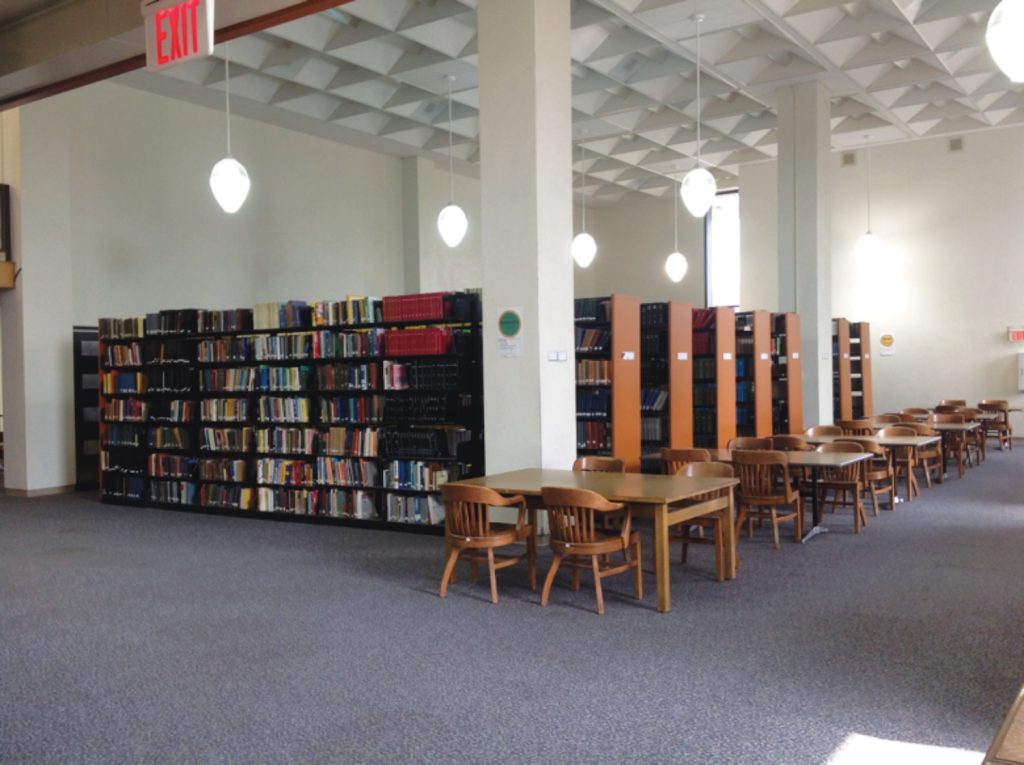 The Old – Fifth floor Cooper Library Before the Relocation Project 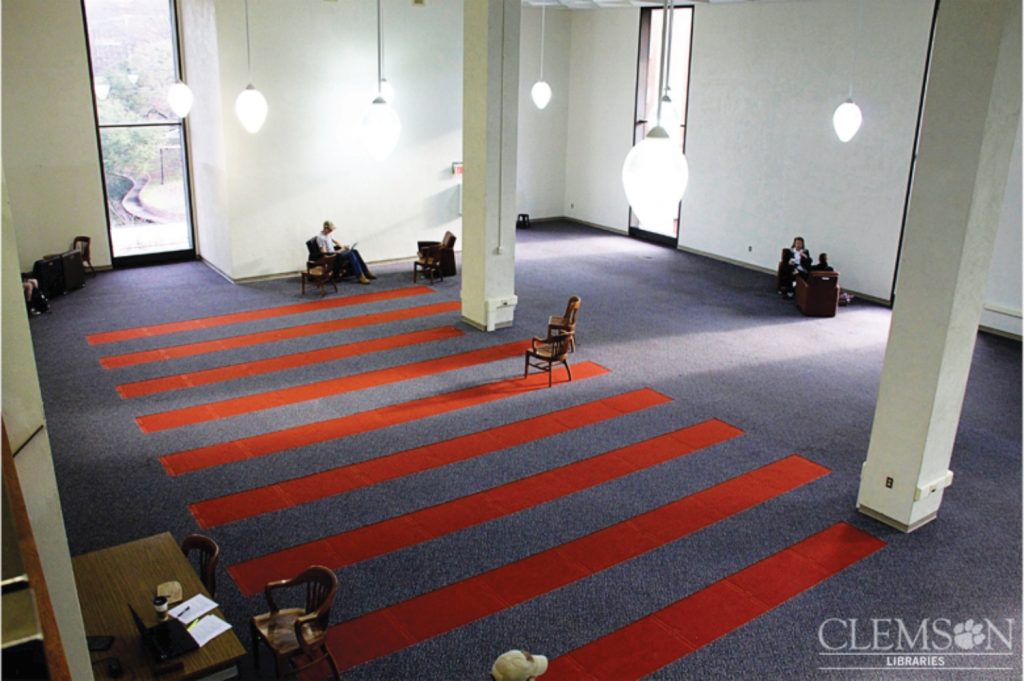 After the Relocation Project 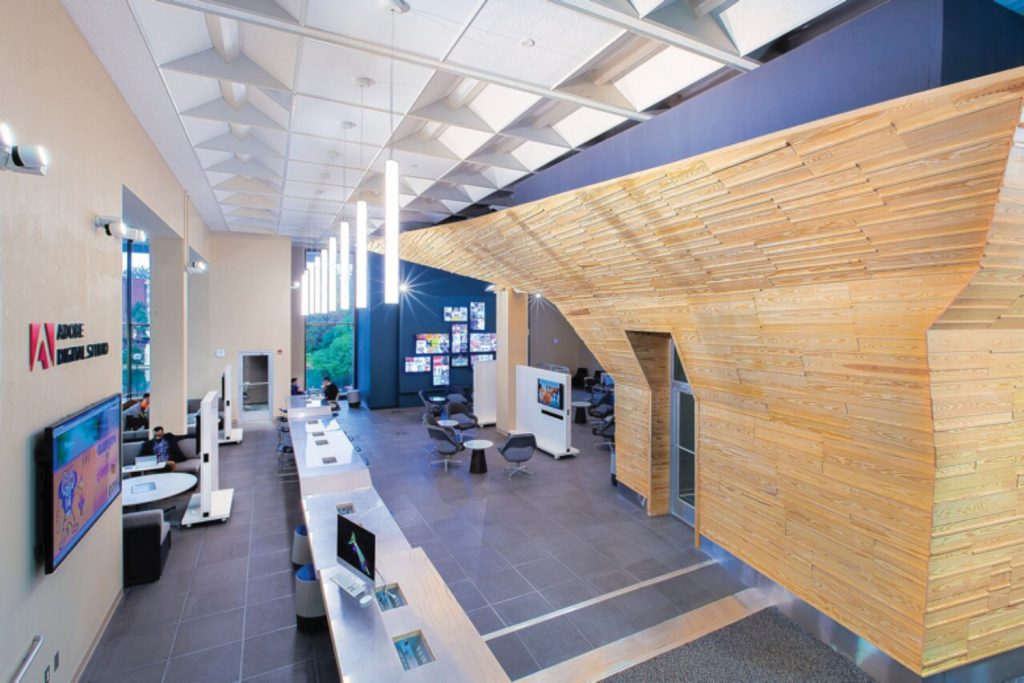 The New – The Adobe Digital Studio After Completion