v29 #1 From the Reference Desk

by Tom Gilson  (Associate Editor, Against the Grain, and Head of Reference Emeritus, College of Charleston, Charleston, SC 29401) 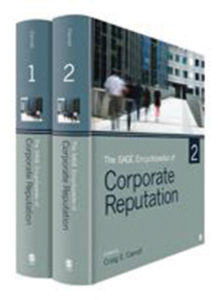 The SAGE Encyclopedia of Corporate Reputation (2016, 9781483376516, $375) is a new reference work that offers students and scholars background information on topics related to a discipline that has only emerged over the last few decades.  Edited by Craig E. Carroll, more than 300 articles written by some 250 contributors from numerous disciplines have been collected to create this two-volume set.

Given today’s preoccupation with ranking products and services it comes as no surprise that corporate reputation is an essential concern for the modern organization.  Consequently, its’ study has blossomed and this reference reflects that growing interest.  Coverage ranges from entries that treat the attributes and dimensions of corporate reputation to strategies for enhancing it as well as articles that delve into legal, moral, ethical and social issues.  In addition, there is discussion of relevant theories, elements of the surrounding environment that impact corporate reputation, and the techniques used to measure and evaluate it.  The results are intended for an academic audience but the articles are written in a style that would be readily understood by the informed business person.  Entry arrangement is A-Z with each article having “see also” references and brief bibliographies.  A helpful Readers Guide gathers related articles and provides a sense of the scope of topics covered.  A general index provides access to specifics.

In addition to offering essential information about relevant topics, a subject encyclopedia on a burgeoning, multidisciplinary area of study can also provide a needed sense of definition to an emerging field.  Fortunately, Mr. Carroll and his contributors have fulfilled both these roles by assembling serious, scholarly articles on subjects pertinent to corporate reputation in a well-organized, easily accessible reference work.  The set should be on the short list for academic libraries supporting business courses touching on corporate reputation.

The SAGE Encyclopedia of Corporate Reputation is also available online via the SAGE Knowledge platform. 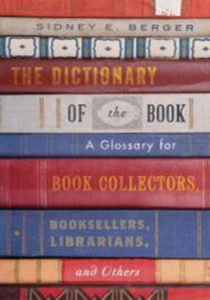 The Dictionary of the Book: A Glossary for Book Collectors, Booksellers, Librarians, and Others (2016, 978-1-4422-6339-0, $125) is a single volume work by Sydney E. Berger, Director Emeritus of the Phillips Library at the Peabody Institute Museum of Salem and is published by Rowman & Littlefield.  Mr. Berger, who himself is an expert in the field, takes his lead from John Carter’s classic ABC for Book Collectors (now in its 9th edition) but his Dictionary seeks to expand both Carter’s coverage and his audience.

Mr. Berger primarily succeeds in this effort by including over 1,300 definitions relevant to others besides book collectors.  Terms germane to librarians, archivists, booksellers, and other scholars are covered.  As such, definitions run the gamut from those related to typeface and printing to those focused-on rare book cataloging, and from those covering book design to those that deal with legal issues.  The definitions themselves are clearly stated and often contain historical background as well as references to additional sources that offer further clarification.  A comprehensive bibliography is also provided as are appendices that cover additional terminology related to paper and paper size, typeface, and binding, as well as a listing of book collector’s clubs and societies.

The Dictionary of the Book: A Glossary for Book Collectors, Booksellers, Librarians, and Others is a viable addition for both public and academic libraries and will be equally at home in reference and circulating collections.  With its attention to details and its broad and comprehensive approach, Mr. Berger’s book should also prove a valuable addition to the personal collections of numerous collectors, booksellers, and librarians. In short, anyone serious about the world of print books will find this book a tempting choice. 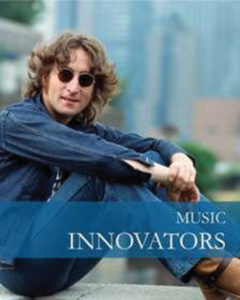 Music Innovators (2016, 9781619258969, $195) is a recent three-volume set from Salem Press that offers biographies of some 350 individuals and groups that have had an impact on the modern music industry.  The clear majority of the content is derived from H.W. Wilson’s Current Biography Magazine.  The focus is broad and covers musicians from numerous genres ranging from classical to hip-hop, jazz to disco, rock to country, and electronic dance music to folk.

Each entry is approximately 3,000 words and employs the same format including an introduction and sections on early life, life’s work, and personal information, followed by a list for further readings.  Each also has a sidebar that describes a significant affiliation for which the subject is best known.  Useful appendices include a musical timeline and both a musical category index and a general alphabetical index.

Relying on Current Biography Magazine as the main source of the entries has pros and cons.  It offers coverage of many popular and newsworthy musicians with a professional journalistic approach, thus ensuring both relevant and reliable facts as well as a straight forward, accessible writing style.  However, it is limited to musicians active after 1940, the start date of the magazine, and those considered newsworthy by the editors of Current Biography.  The result is somewhat uneven.  You have coverage of White Strips but not Paul Whiteman, Meat Loaf but not Van Morrison, Travis Tritt but not Talking Heads, and Jackie Gleason but not the Grateful Dead.  That being said, the set does include true innovators ranging from Duke Ellington to Lady Gaga, Barbra Streisand to Kanye West, Lena Horne to Neil Young, and Merle Haggard to Madonna.

While in no way comprehensive, Music Innovators offers well-written, informative essays that cover the careers and contributions of numerous well known musical innovators.  Although more journalistic than scholarly, it should be useful to high school students and patrons of public libraries as well as undergraduates being served by many academic libraries.  Admittedly, a lot of this information is available online but this set offers readers one convenient source to numerous musical innovators as well as leads to others in the same genre.

As is the case with all Salem Press works, a print purchase includes access to an online version.

SAGE will be releasing a couple of new titles in a month or so:

ABC-CLIO will be releasing some new titles including:

Caught My Eye by Katina: How an 18th-Century Cookbook Offers Glimpses of Jane Austen’s Domestic Life

ACRL Sets 2021 Legislative Agenda The ACRL Insider reports that "The 2021 ACRL Legislative Agenda focuses on eight issues that the U.S. Congress has recently taken, or will most likely take, action on in the year ahead: Federal Funding for LibrariesNet...

Sold: Sylvia Plath’s Rolling Pin and Recipes is by Rebecca Rego Barry, author of "Rare Books Uncovered: True Stories of Fantastic Finds in Unlikely Places." Her post appears in Gastro Obscura Browned and splattered, a set of recipe cards owned by the Pulitzer...