v28 #2 From the Reference Desk

by Tom Gilson  (Associate Editor, Against the Grain, and Head of Reference Emeritus, College of Charleston,
Charleston, SC 29401) 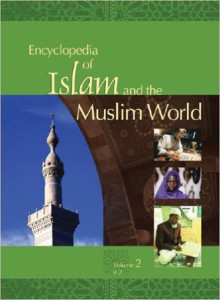 The second edition of the Encyclopedia of Islam and the Muslim World (2016, 9780028662725, $489) published by Macmillan, part of Gale Cengage Learning has just been released.  Updating the 2004 version, the set is again edited by Richard C. Martin and contains 540 articles by more that 350 scholars arranged alphabetically in two volumes.  According to Mr. Martin the second edition has some 260 entries that are new or have been revised as well as “more than 350 photographs drawings, maps and charts… nearly twice as many as the first edition.”

Like it’s predecessor, the scope here is broad and expansive, employing a multidisciplinary approach.  Articles deal with individual aspects of a number of larger themes like art and architecture, language and literature, law, the economy, education, and the sciences.  In addition, there are essays that delve into the specifics of family, ethics, and society, as well as those covering important organizations and political movements, and of course, various Islamic religious sects, sites and practices.  Entries have also been included that focus on those countries and peoples who identify themselves with Islam as well as major Muslim cities.

The individual entries are factual, descriptive and provide relevant analysis while at the same time offering useful historic context.  There is an obvious attention to scholarship throughout the set with each entry being signed, including the academic credentials and affiliation of the author.  Entries can run from brief explanations and definitions to long involved essays.  The articles are cross referenced and each has a bibliography appropriate to the length of the entry.  Unfamiliar concepts and terms are usually explained in the article but there is also a useful glossary.  Other value added features include a very useful thematic outline, a thorough and comprehensive index and a multi-part chronology divided by world regions.  Perhaps one of the most impressive features of these two volumes is the attention to quality illustration and layout contributing to a truly handsome presentation.  The use of numerous color plates, maps, and attractive side bars makes this reference stand out.

The Encyclopedia of Islam and the Muslim World is a truly impressed effort.  It provides students and serious lay readers with an academic reference that is scholarly and well researched but reader friendly.  Expertise is drawn from a number of disciplines and editor Richard C. Martin is at pains to note that the contributors come from a highly diverse collection of international scholars.  The coverage is broad and inclusive with top-notch production values that visually enhance both volumes. 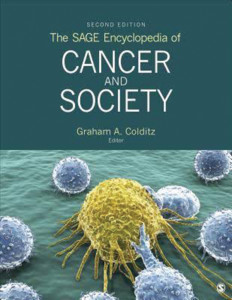 The SAGE Encyclopedia of Cancer and Society (2016, 9781483345734, $495) is a second edition of a title that was first published in 2007 and received a 2008 Editors’ Choice Award from Booklist.  Once again the editor is Graham A. Colditz who has assembled some 280 contributors to write the more than 600 articles contained in the set half of which have been revised along with 30 articles that are new to this edition.

As one would expect, these three volumes contain numerous articles on the specific forms of cancer.  But equal emphasis is placed on the behavioral and social factors that both cause, prevent, and relieve cancer.  Given that, there are articles that discuss carcinogens and prevention as well as treatments and therapies, not to mention related societal issues like poverty, the environment, and life style choices.  In addition, there are entries that describe cancer in over 120 countries from Afghanistan to Zimbabwe as well as those covering major hospitals and treatment centers, numerous cancer related associations and pharmaceutical companies.

As befits a topic of such importance, the articles are fact filled, detailed, and objective.  The approach is scholarly and informed by current research, while at the same time, the results are intelligible to the interested lay readers as well as to undergraduates and graduate students.  Of necessity, medical terms are used, but they are described and explained within the entry, and in addition there is a useful glossary.  “See also” references and further reading lists are included for all articles.  The arrangement is alphabetical and for finding aids there is a Reader’s Guide that gathers articles into broad categories as well as a helpful general index.  There is also a resource guide in volume three that lists a variety of relevant books, journal titles, and websites.  In addition, there is an appendix that contains the Surveillance, Epidemiology and End Result (SEER) statistics from 1975-2011.

The SAGE Encyclopedia of Cancer and Society offers researchers a comprehensive, well designed, and accessible resource.  With these three volumes, editor Graham A. Colditz and his contributors provide a valuable service in describing and defining the problems cancer poses worldwide, along with the forces and various methods being used to combat it.  They offer a significant amount of useful and relevant information as well as a starting point for more extensive exploration.  Most academic libraries would do well to give it serious consideration.  It might also find space on the shelves of larger public libraries where there is interest. 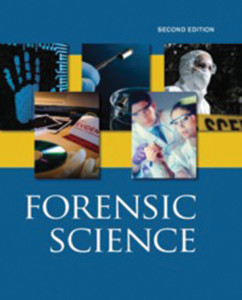 Another second edition that should be up for consideration is Salem Press’ Forensic Science (2015, 978-1-61925-729-0, $364; e-ISBN: 978-1-61925-730-6, $364) edited by Ayn Embar-Seddon and Allan D. Pass.  This is a three-volume set that explores the use of science in criminal investigation to accumulate evidence in solving crimes.  However, it also discusses the broader role that forensics plays in civil cases and in identifying victims of accidents and natural disasters.  In short, the editors and their contributors try to offer an academic but real world approach to what admittedly has become a popular topic of discussion due to TV crime shows and the media.

As such, while Forensic Science covers topics like poisons and antidotes, gunshot wounds, and blunt force trauma, there is also coverage of the role of forensics in art forgery, product liability, and accident investigation and reconstruction.  In addition, specific types of evidence are discussed in individual entries as are various branches of forensics ranging from forensic accounting to forensic psychology.  There are also articles that discuss professional aspects of forensics ranging from specific tools and methods to relevant associations and institutes and from key publications to the importance of professional ethics.

The articles vary in length from 500-3,000 words and are written in a straightforward and descriptive style.  Each entry starts with a brief definition of the topic and an indication of its significance.  The remainder of the essay offers a clear explanation of the topic that provides relevant and useful information as well as offering a firm foundation for further research.   Sidebars are used to emphasize certain elements within a topic and as you would expect, “see also” references guide readers to related articles.  In addition, there is a category guide in the last volume that is helpful in grouping articles into broad subject areas.  All entries have brief bibliographies.  The set is not heavily illustrated but includes black and white photos as well as some tables and charts interspersed throughout each volume.  Overall the entries are well organized and the layout is inviting and readable.

The second edition of Forensic Science is a scholarly, fact-based treatment of a topic that has grown substantially in interest and popularity.  The essays are succinct and accessible and provide a resource that will be appreciated by high school students, undergraduates and the informed lay reader.  Libraries interested in a handy, less involved treatment may also want to consider A Dictionary of Forensic Science by Suzanne Bell (2013, 9780199594009, $21.95; eISBN: 9780191757648) published by Oxford University Press.

According to their Websites a number of reference publishers are releasing some new and upcoming titles including:

ABC-CLIO/Greenwood has also added a couple of new titles:

And last but not least, Oxford University Press is planning some new releases: