Home 9 Blog Posts 9 ATG Book of the Week: The Most Dangerous Book: The Battle for James Joyce’s Ulysses

ATG Book of the Week: The Most Dangerous Book: The Battle for James Joyce’s Ulysses 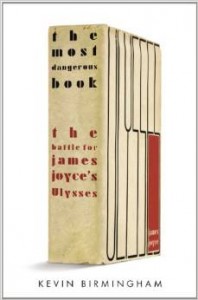 Title: The Most Dangerous Book: The Battle for James Joyce’s Ulysses

“For more than a decade, the book that literary critics now consider the most important novel in the English language was illegal to own, sell, advertise or purchase in most of the English-speaking world. James Joyce’s big blue book, Ulysses, ushered in the modernist era and changed the novel for all time. But the genius of Ulysses was also its danger: it omitted absolutely nothing. All of the minutiae of Leopold Bloom’s day, including its unspeakable details, unfold with careful precision in its pages. The New York Society for the Suppression of Vice immediately banned the novel as “obscene, lewd, and lascivious.” Joyce, along with some of the most important publishers and writers of his era, had to fight for years to win the freedom to publish it. The Most Dangerous Book tells the remarkable story surrounding Ulysses, from the first stirrings of Joyce’s inspiration in 1904 to its landmark federal obscenity trial in 1933.

Literary historian Kevin Birmingham follows Joyce’s years as a young writer, his feverish work on his literary masterpiece, and his ardent love affair with Nora Barnacle, the model for Molly Bloom. Joyce and Nora socialized with literary greats like Ezra Pound, Ernest Hemingway, T. S. Eliot and Sylvia Beach. Their support helped Joyce fight an array of anti-vice crusaders while his book was disguised and smuggled, pirated and burned in the United States and Britain. The long struggle for publication added to the growing pressures of Joyce’s deteriorating eyesight, finances and home life…”

“[G]ripping. Like the novel which it takes as its subject, it deserves to be read.”

“[A] deeply fun work of scholarship that rescues Ulysses from the superlatives and academic battles that shroud its fundamental unruliness and humanity.”

“Exultant….Drawing upon extensive research, Birmingham skillfully converts the dust of the archive into vivid narrative, steeping readers in the culture, law, and art of a world forced to contend with a masterpiece.”

“[A] sharp, well-written debut….Birmingham makes palpable the courage and commitment of the rebels who championed Joyce, but he grants the censors their points of view as well in this absorbing chronicle of a tumultuous time. Superb cultural history, pulling together many strands of literary, judicial and societal developments into a smoothly woven narrative fabric.”

“What begins as simply the ‘biography of a book’ morphs into an absorbing, deeply researched, and accessible guide to the history of modern thought in the first two decades of the 20th century through the lens of Joyce’s innovative fiction.”

“Birmingham delivers for the first time a complete account of the legal war waged…to get Joyce’s masterpiece past British and American obscenity laws. Birmingham has chronicled an epoch-making triumph for literature.”