Collaboration is King in Cartozia

It is refreshing to see creators mobilize and take advantage of the Web as a tool of their trade in the era of digital publishing.  Of late, it is hard to recall a project more exciting than Cartozia Tales, a small group storytelling venture that recently crowdfunded the first ten printed issues of its independent comics anthology.  The group is clearly savvy of the Web as a tool for both creation and distribution.  Creators Sarah Becan, Lucy Bellwood, Isaac Cates, Shawn Cheng, Lupi McGinty, Tom Motley, Jen Vaughn, and Mike Wenthe made a simple Squarespace site to showcase their initial art and blog news and updates.  They created a project Twitter handle (@Cartozia,1 though many of the crew are active under their personal accounts), and pointed people to Kickstarter.  Once word got out about the creators involved and their idea, Cartozia Tales made its Kickstarter funding goal, with 763 backers pledging $44,151, just over their modest $39,900 goal.2  In short, this is how you do collaboration today.

As its cartographic name implies, Cartozia Tales recalls the maps common in sword-and-sorcery storytelling, the introductory spreads of Tolkien’s Middle-Earth or the campaign settings of 1970s and ’80s paper RPG games like early Dungeons & Dragons.  Cartozia’s map isn’t just for dressing or ambiance, however.  It really does play a central role in the storytelling.  The core creators, led by writer and editor Isaac Cates, have split their map of Cartozia’s isles into a nine square grid.  Placenames like Whistlepig Woods and Smithereens, so instantly evocative as to make A.A. Milne jealous, are sure catalysts for starting narratives.  Creators alternate grid locations with each issue, incorporating each others’ ideas, characters and settings as their own muses dictate.  They will reference each others’ creations, but not necessarily pick up previous storylines.  With this loosely rotating structure in place, they have embarked to build a constantly evolving shared world. 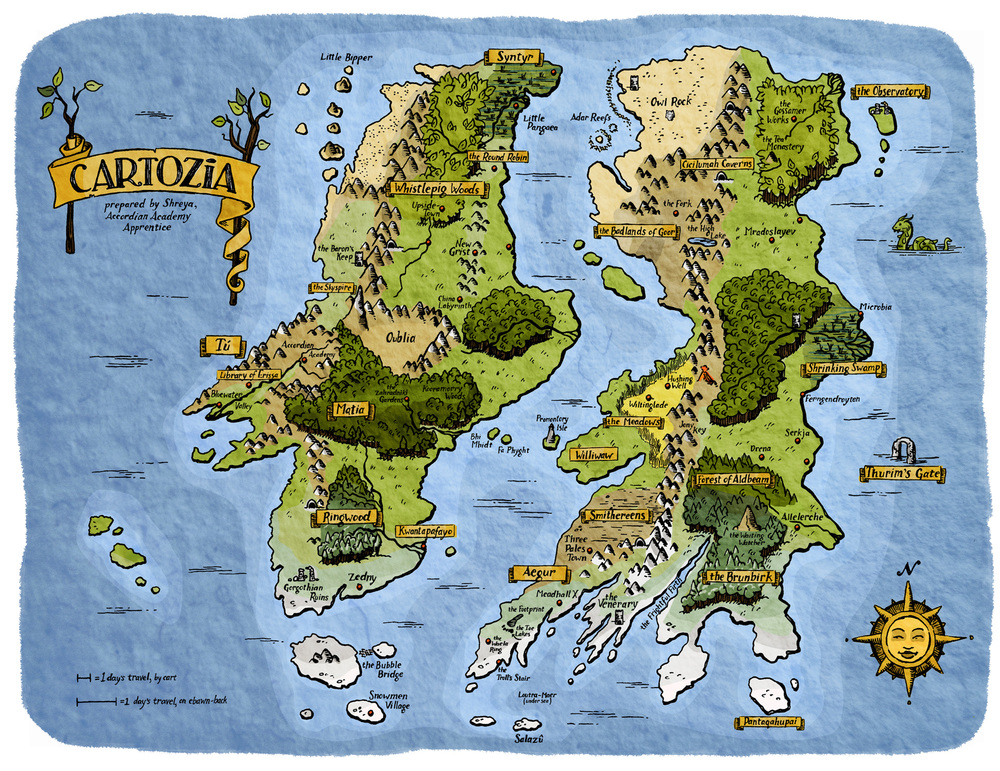 Guest authors and artists will also feature in each issue to keep Cartozia fresh, both by adding new ideas and styles, and doubtlessly allowing each of the core eight creators a chance to take a month off and focus on other projects.  The roster of guest creators is already impressive.  Adam “Apelad” Koford of pioneering Webcomic Laugh-Out-Loud Cats fame is in Cartozia Tales #2.  American Elf creator and cartoonist laureate of Vermont James Kochalka also wrote a story for this issue.  Upcoming guests include such heavy hitters as Kelly Sue DeConnick, who revamped Marvel’s Captain Marvel as an empowering feminist icon and co-creator (with Emma Rios) of the atmospheric and macabre Pretty Deadly from Image.  Ben Towle, writer and illustrator of the indie Webcomic Oyster War and historical fiction graphic novel Midnight Sun from SLG Publishing, is also on the guest roster.  Cates currently has commitments for guest slots up to issue eight.

Bonus works are created as companions to each issue.  The small volumes available from the Cartozia crew include An Alphabetical Bestiary of Cartozia and An Introduction to Cartozian Magic, each available on their store.4  The zine-like references harken back to the endless D&D sourcebook days of Gary Gygax and Dave Arneson at TSR and will be instantly familiar to role-players.

The four-heads-tall characters and anthropomorphic animals are evidence of the books’ all-ages format.  “If you can read,” they offer, “you’re part of the audience we imagine.”5  This approach has gained praise from both Comics Alliance’s Chris Sims6 and Geek Mom’s Jenny Williams.7

The Cartozia group was also forward-thinking enough to include “Libraries and Librarians” as a backer level on their Kickstarter, complete with promotional materials and an allusion to a librarian character in their world:

LIBRARIES AND LIBRARIANS: A ten-issue subscription, plus access to our curriculum of activities (on cartooning, mapmaking, storytelling, etc.), plus 30 full-color bookmarks and a 2’x3’ poster drawn by our core cartoonists.  The poster features Malith (a librarian of Erissa), her daily struggles in a library of rare enchanted tomes, and her inspiration in nurturing the curiosity of young readers.  (It’s funny and just a little sweet.)  Add $15 to receive the “fun bonuses” for each issue;  add $55 (+$35 if international) to receive two copies of each issue.8

If your library didn’t get in as a Kickstarter contributor, don’t worry.  You can still subscribe or buy individual issues and bonus books on Cartozia’s Big Cartel storefront at cartozia.bigcartel.com.