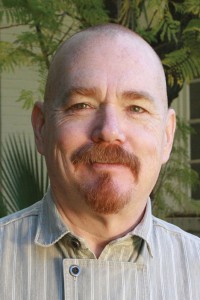 Editor’s Note:  deg farrelly, Media Librarian at Arizona State University, has been in librarianship his entire career.  He currently serves as chair of the National Media Market (in Charleston this year, November 3-7!) and on Alexander Street Press’s video advisory board.

He and Jessica Kemp, Alexander Street’s marketing director, engaged in an email chat recently.  Below is an edited version of their exchange. — KS

JK:  How did you get involved in media librarianship?

df:  I guess I was destined to be a librarian.  Except for summer factory jobs, and a stint in a local restaurant, the only work I have done my entire life has been in libraries.  In grade school and high school I was a volunteer assistant in the library.  Also in high school I started my first paying job, working at the Palatine, Illinois, public library as a page.  At the time, Arthur Curley was the director, and Dale Canelas the assistant director.  Arthur went on to be the president of ALA, and Dale the director at Northwestern University and then Stanford.  So I had strong and positive influences on the possibilities of libraries at a very early age.

I left college after one semester, and because of my experience with the Palatine library landed a temporary job with the North Suburban Library System (NSLS) in the Chicago suburbs.  As one of two delivery van drivers for the system, I visited half of the NSLS libraries one day, and the other half the next day.  Again, there were very strong and positive influences in my career working under Robert McClarren.  At the time Illinois was a national leader in shared library resources and NSLS was engaged in innovative approaches for resource sharing.  Among these were a union (card!) catalog of the member libraries to facilitate ILL, Central Serials Service for sharing periodical back files, and the first efforts to introduce integrated library systems in the member libraries.  But the service that most interested me was the Suburban Audio Visual Service.  In partnership with the Suburban Library System, NSLS offered an extensive collection of 16mm films that could be booked for personal use at any of the NSLS member libraries.  My role was to deliver the films to the member libraries, along with the book deliveries.  In the process I saw the tremendous opportunities of media to enrich everyday lives, as well as the potential for resource sharing, and I was hooked.

When I returned to undergraduate college a year later my plan was to get my BA, then go to library school to become a media librarian.

Along the way, I also held a summer internship in the Illinois State Library, working in government documents.  But while there I was further inspired by the head of media in the State Library, Garnetta Cook.

JK:  How is the media librarian’s role evolving?

df:  Unfortunately, the media librarian is disappearing!  In the last year alone I know of four media librarians who retired and were not replaced in their libraries.  On the discussion lists we often hear from library staff members who explain that the library has taken over a media collection and the responsibility now falls to that staff member, often in a circulation or access services unit.

The role of the librarian in general is changing, and disintermediation through improved database searching, profiles and PDA for book selection, and outsourced reference services are eliminating many of the functions that many librarians traditionally fulfilled.  It shouldn’t really be a surprise that media librarians are being similarly affected.

There is high demand from users, both faculty and students.  Kauffman and Mohen’s 2009 study revealed that faculty are not able to find the media they want in the library and thus go outside the library to find it.

To use a favorite phrase, media has long been the redheaded stepchild in the academy.  Most subject librarians are not at all equipped to respond to inquiries for information in a media format.  They are not familiar with the market and how video distribution varies significantly from monograph distribution.  They do not know the scope and range of the various media distributors.  Nor are they versed in copyright as it applies to media or the issue of public performance rights.

Unfortunately, while there has never been a time when media was more important in the library and education, or more readily available, the deep knowledge and expertise of the media librarian is disappearing.

JK:  What is one thing you’re excited about when it comes to media in the academy?

df:  In many ways we’re entering a golden age of media in the academy!  Streaming video is opening up unlimited possibilities for the use of media in instruction and research.  Because this new format allows 24/7/365 access to videos, faculty are freed from the requirement to use class time to screen the content and instead can use that time to discuss it.  Similarly, the flexibility of the streaming format facilitates using just a small amount of a film to illustrate a key point, or multiple pieces of film can be assembled into a playlist.  Freed from the cumbersome physical container and complicated projection/playback machinery, more than one user can access a film at the same time.

Furthermore, using media is an approach with which students are familiar and comfortable.  They, as well as younger faculty, were raised with wide access to media and expect it to be used.

Improved access through semantic searching and discovery tools makes media in collections even easier to identify and access.

JK:  And one thing you’re concerned about?

df:  Am I really limited to one?

df:  I have a list, but let me address three briefly.

Media Visibility — Besides the disappearance of the media librarian, I am concerned about the extent to which media remains off the radar of most librarians.  I can cite numerous examples, but two very recent ones come to mind.  An environmental scan for academic libraries by a major professional association fails to even mention media (apart from a short reference that the Internet Archive has video clips), and a significant research study by a major academic publisher on providing access to freely available materials also fails to mention media.  I could go on, but these two examples illustrate that without a strong voice advocating for media, it is invisible to most librarians.

Preservation — I’m also concerned about preservation of existing media collections.  Libraries have invested hundreds of thousands of dollars in video collections that are in soon-to-be obsolete formats.  Although VHS is not officially obsolete by the standards of the copyright office, many of our users do not or have never owned a VHS player.  Classroom support services in our institutions are discontinuing VHS players in the classroom.  What is to become of our vast analog video collections?  Will libraries have to repurchase the content again?  Many of these titles are not available in newer formats and never will be.  Until the copyright office liberalizes permission for format transfer or declares VHS obsolete, libraries will not be able to move ahead with format migration.

Further complicating preservation is the total absence of protective dark archives and protocols for streaming video collections.  Portico, LOCKSS, and CLOCKSS have been established for print collections, but again, video is off the radar.  Who will provide the leadership and funding to replicate these endeavors with our vast media collections?

Discovery — Our survey revealed that almost 25 percent of libraries with streaming video do not catalog their streaming videos!  Can you imagine that being acceptable for our monograph collections?  Those that do provide catalog records rely heavily on vendor-provided MARC records or metadata.  Though vendors have resisted this added expense, the larger companies have seen the value of helping make their content discoverable.  But the quality of these records varies widely, and some are subpar for academic libraries.  Discovery tools and services have the potential to improve the ability to identify media resources, but so far, in my experience they are ineffective.  Discovery tool indexing has relegated media to a lower tier of importance.  Discovery precedes usability; you cannot use what you cannot find.

Major database publishers have indexed scholarly publishing for decades.  But here again, media is off the radar screen.  Why aren’t the subject indexes from these library partners providing index information to appropriate content in media format?

JK:  Five years from now, what will streaming media’s role in the library be?

df:  Demand for media will only continue to increase.

While physical collections will continue to coexist, in my opinion, within five years all media acquisitions will be streaming format.

New pricing models will continue to evolve, with subscription and PDA models being dominant.  Opening up access to a vast array of content and letting the end user select what s/he wants to use will be the dominant method for providing access to media content.

Librarians and/or library staff will need to learn to use the editing tools in larger collections to assist users in customizing playlists.

It is possible that media collections will become largely an outsourced service, with large distributors providing the bulk of the current collections, and third-party services hosting the library’s unique content.  There is terrific opportunity to share collections via consortia or other arrangements.