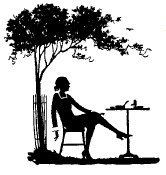 Our daughter just got married yesterday! Whew! Unwinding and cleaning up and organizing wedding presents because they are off on their honeymoon. He didn’t tell her til they were on the plane headed to Atlanta that they are going to Spain, Morocco, and Paris! Woohoo!

Registrations for the 33rd Charleston Conference are still coming in! But was sad to learn that Stuart Grinell, Senior Vice President of Business Development at Ambassador Education Solutions   will be missing his first Conference since 1988! He has a conflict with a regional accreditation meeting that he is forced to attend. Usually Stuart brings his beautiful wife and kids before or after the Conference to enjoy the beach and other Charleston festivities. BTW, did you know that Stuart is good friends with Bob Molyneux and he and Bob are great car racing fans!

For the first time ever, the Charleston Conference is excited to make available a select group of our 2013 sessions as a live broadcast online via UStream.  For times and more info, see our full announcement.

Checkout our online interview with Jennifer Lohmann, Adult Services Manager, Durham (NC) County Southwest Regional. The Durham Library Foundation is hosting an online auction for people to bid on naming privileges for a character in Jennifer’s fourth romance novel Weekends in Carolina. What a great fund raising idea! Anyone can (and should!) put in a bid at http://www.durhamlibraryfoundation.org/auction/

Prue Adler sends information that on September 30, ARL, together with 71 other privacy and civil liberties groups, sent a letter to the US Senate and House Judiciary Committees (PDF), calling on Congress to provide greater transparency around national security–related requests by the US government to Internet, telephone, and web-based service providers for information about users and subscribers. The coalition strongly supports the Surveillance Transparency Act of 2013 (S. 1452) and the Surveillance Order Reporting Act of 2013 (H.R. 3035), each of which would clarify that companies have the right to publish basic statistics about the government demands for user data that they receive. The coalition sent the letter to urge Congress to hold hearings on the issue of surveillance transparency as a prelude to the markup of these bills. This letter follows the July 18 letter (PDF) that the coalition sent to the Senate Judiciary Committee.