ATG Book of the Week: Thieves of Book Row: New York's Most Notorious Rare Book Ring and the Man Who Stopped It 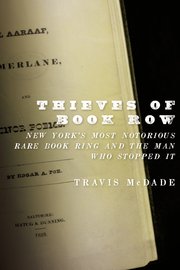 Title: Thieves of Book Row: New York’s Most Notorious Rare Book Ring and the Man Who Stopped It

“No one had ever tried a caper like this before. The goods were kept in a secure room under constant scrutiny, deep inside a crowded building with guards at the exits. The team picked for the job included two old hands known only as Paul and Swede, but all depended on a fresh face, a kid from Pinetown, North Carolina. In the Depression, some fellows were willing to try anything–even a heist in the rare book room of the New York Public Library.

In Thieves of Book Row, Travis McDade tells the gripping tale of the worst book-theft ring in American history, and the intrepid detective who brought it down. Author of The Book Thief and a curator of rare books, McDade transforms painstaking research into a rich portrait of Manhattan’s Book Row in the 1920s and ’30s, where organized crime met America’s cultural treasures in dark and crowded shops along gritty Fourth Avenue. Dealers such as Harry Gold, a tough native of the Lower East Side, became experts in recognizing the value of books and recruiting a pool of thieves to steal them–many of them unemployed men who drifted up the Bowery or huddled around fires in Central Park’s shantytowns. When Paul and Swede brought a new recruit into his shop, Gold trained him for the biggest score yet: a first edition of Edgar Allan Poe’s Al Aaraaf, Tamerlane and Minor Poems. Gold’s recruit cased the rare-book room for weeks, searching for a weakness. When he found one, he struck, leading to a breathtaking game of wits between Gold and NYPL special investigator G. William Bergquist.”

McDade does a superb job of drawing a complete picture of the environment in which the Romm Gang operated…” and “makes a smart choice to spin his tale around the mostly forgotten individuals who participated in a widespread scheme to steal library books”  Carolyn Kellogg,  “Throwing the book at ‘Thieves of Book Row'”   Los Angeles Times