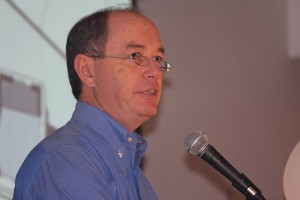 Born and lived:  Born in Melrose, Massachusetts.  Grew up in Massachusetts and have lived in Chicago, New York, Singapore and New Jersey.

Professional career and activities:  From 1983 to 1995, various operational roles on three Time Inc. weeklies, including TIME magazine.  From 1995 to 1998, senior vice president and associate publisher for Hammond Inc., a reference publisher now owned by Langenscheidt.  Since 1998, a consultant to magazine, book and association publishers.

In my spare time:  I try to golf and occasionally garden;  have volunteered as an elected member of a board of education and a trustee of my high school.

Pet peeves:  I don’t do too well with rudeness.

Philosophy:  Socially liberal, fiscally conservative, but always in that order.

Most memorable career achievement:  Presenting “Context first,” which had been illustrated by my oldest child, who is an artist, to an audience of 1,400 people at O’Reilly Media’s “Tools if Change” conference in New York in 2011.

Goal I hope to achieve five years from now:  To put some of my ideas to the test (in a non-consulting role), to write and publish at least one book, and to have at least one year during which I don’t work on any Saturdays, Sundays, or holidays.

How/where do I see the industry in five years:  In established markets, sales of physical and digital objects — containers — will be flat or fall slightly;  prices will fall as well, putting pressure on most publishers.  Unit growth in emerging markets will be more robust, but prices will not match those seen in the past in established markets.  Cultivating global communities and meeting their content requirements will become a way for content producers to differentiate themselves.  Success here will leverage increasingly sophisticated metadata and the enormous reach offered by the Internet.