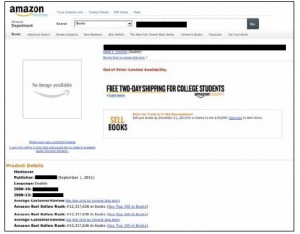 If you look at the screen-shot captured here (accessed 19 November 2012) you’ll think that this book, now out-of-print, is one I wrote but that apparently did not do well.  You’d only be half right, and therein lies a tortuous tale.  This book is not out-of-print because it never saw the light of printed day.

In February of 2009 (I still have all the emails so that’s how I can be so sure of this) I got an interesting correspondence with the subject line “looking for writers.”  I was about to delete it when I thought, “What the heck,” and clicked on it.  Besides, this was an extremely well-known publisher, and I felt I couldn’t go wrong.  Ah, “…what dire offense from [casual] causes springs/What mighty contests rise from trivial things!”  I should have been more wary of Pope and his Dunciad, for my lock was about to get raped.

I answered the email and said I was interested.  The kind editor wrote back with great excitement and overmuch flattery.  A few more emails were exchanged and I agreed to a book the topic of which I needed to know more. All my books have been on topics I wished to know more about.  Yes, yes, I hear wiseacres saying, “So that’s what’s wrong with them.”  But isn’t that why we all write?

In any event, flattering editor and sycophantic writer agreed on social networking as the topic of said forthcoming book.  This would be a book-for-hire.  Until then, I had always written for royalties alone and been happy — mostly — with the outcome.  Undertaking a book-for-hire was new for me and, honestly, something I agreed to with more than a little trepidation.  Payment would be made in three installments.  One immediately, another on submission of the full manuscript, and a final one after all edits.

The editor asked for a “detailed” outline as quickly as possible.  Every editor I’ve had the pleasure to work with has asked for a sketchy outline at best — general, broad categories — and certainly no more than a page or two.  But hope springs eternal in the heart of fools, so I began working on the outline.  In the exuberance of the email exchanges, I asked if the editor wanted the names of other writers.  Yes, of course.  I sent a dozen names, perhaps.  I also completed said “detailed” outline — about eight pages long, and sent it in.

Meanwhile, I wrote friends to tell them about this “opportunity” forwarding the emails sent to me.  At least two came forward and replied to my newfound friend.  Meanwhile, my outline came back.  No, said the editor, this was not exactly what was wanted.  Not even close.  Do I want to try again?  I was baffled but redoubled my efforts, spending a great deal more time and energy on the outline than I’ve ever spent on any other.

About two weeks later came another email.  Oh, you are “this close” said my new digital pen pal.  But, well, no, not there yet.  I called. “What exactly are we looking for here?  I’m baffled that I have struck out, so to say.”  But this spider to my fly had just the right parlor-game answer:  it was not at all uncommon and surely another whack would fell the tree.  So, I said fine, but to be clear, I said, this would be my final strike.  Surely, I was not the right person after all.

Third time is charming, and I soon got a fabulously flowing, almost gushing email, at least compared to the others.  This is it, I had hit a homerun; it was everything asked for and more, yada, yada, yada.  It was surely a go, and the contract would be forthcoming.  By now, April had turned into July.

My correspondent and I exchanged many more emails over the next six months.  I was to submit most of the book by the end of December, and, by golly, I nearly made it.  I asked several questions by email, included a snippet here and there, and all seemed to be on track.  By the end of the first week of January I had submitted everything.  I would hear back soon, I was told.

I emailed in March when I had heard nothing.  Then came the a-bomb email in April, late April, really.  Corrections coming, I was told, but don’t be alarmed.  Uh-oh.

After spending weeks in September and October going over what this was to look like and how the summary chapter was to appear, etc. etc., my correspondent seemed to have changed courses.  A very detailed manuscript came back and not a page had been left unscathed.  The editor had spent an extraordinary amount of time on it but what had happened in the interregnum?  I should happily bow out.

No, no, don’t do that, came the reply.  A plaintive quality to the voice made me calm down but inwardly regretting I had ever said yes.  Okay, I said, I would try to see what I could do over the weekend and get back.

I made the wholesale changes all weekend long recasting just about everything in the book.  It was now really the work of my editor as much as my own.  I’m fine with being saved from myself, as whoever does the saving is generally always better.  In many cases it appeared to me to be a matter of pa-tay-toe, pah-tah-toe, but I’m sure every writer thinks that. I sent it back in anyway.  Almost immediately we were friends again.  The book was exactly as needed, and I would hear back more in just a bit.  Check’s in the mail.

Well, sort of.  For the next ten weeks, I heard nothing.  I emailed, I called, I left short and long messages.  Nothing.  No reply.  Nada.  In desperation I called and asked for someone else.  After more weeks and more emails, I found someone who told me my pen pal had left the company, months ago.  Fine, I said, but I still need to get paid since the manuscript was accepted.  Those I knew working on manuscripts for this same publishers (and same series) were having the same problems.

At this point, the story gets ugly, well uglier.  I called, I ranted, I raved, all to no avail.  Meanwhile, my now quondam friends had experienced the same no calls, no responses, no payments.  I badgered, I argued, and I sent nasty emails.  I finally mentioned breach of contract.  At one point, I found a sympathetic employee who looked into my case and agreed with me I had been treated shabbily, as had my friends.  Unfortunately, it was still another half-dozen weeks before anything was done.

After most of the payment had been made, I was promised that the book would come out, that everything was on track, and that I would see the final manuscript before it launched.  That was sixteen months ago.  So far, the screen-shot is all I have heard or seen from the publisher.  As for my friends, their outcomes were less happy still.  One never got anything.  Another was asked to turn over the rights (without full pay), but she refused.  While I can account for my own work and argue its inferiority, one of my friends is an award-winning author for several different books.  We were all uniformly treated with contempt.

I point all this out because I believe this is the kind of shabby treatment that forces writers to by-pass conventional publishers, driving good, fine, but small publishing houses out of business.  While I think I have a viable manuscript on social networking (call me!), I am certain my friends have excellent ones (Legalization of Marijuana, Gay Marriage).  But none of us will ever again write for this publisher.

Maybe this is where digital publishing is taking us.  Smallish publishers get bought out by larger conglomerates (as this one was during my sad experience).  Those conglomerates starve off or ignore once-robust firms to push other ventures.  That’s their business, of course, but a word here or there would be most helpful.  In my case all someone had to do was talk to me and tell me what was going on.  No one ever did.

I realize writers are a dime a dozen, or I should say writers like me are.  But even those of us who write academic versions of penny dreadfuls (I speak only for myself) should be treated fairly and cordially.

Is that really too much to ask?