If you’ve made it this far—and I’m sure many of you have—then you know what this article is about: QR codes, or Quick Response codes (also referred to, though less frequently, as mobile codes 2d barcodes, or 2d codes).  QRs are not new by any stretch of the imagination.  In fact, they’ve been around for about a decade and a half.  A company called Denso Wave created them, and they have seen wide use, mainly in Japan at first, and then throughout the world.  QR codes were, at birth, a rectangular mesh or hodge-podge bar code that looked anything but eye-catching.  In many ways, the lethargy with which they have been embraced in this country may have something to do with their early, very plain appearance.  They look like a geek-button or something to attach to a pocket-protector.  The guys on the “Big Bang Theory” might well hyperventilate over them, but Penny would merely stare at them quizzically, and not only because she’s a blonde.  When seen for the first time, most of us stare at them with arched eyebrows of disbelief. 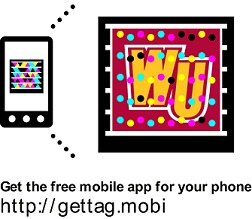 The v.23 #4 print issue contained only the article title and QR Code above to link readers to the article on our website.

QR codes developed, ostensibly, to decode large amounts of information quickly over the Web by pointing to a URI (uniform resource identifier). Applications were limited in the beginning, but now they deliver entire Websites, largely owing to their use via smartphones with camera technology.  QR code popularity in the US certainly owes its recent rise to smartphone use because  most any smartphone with a camera can support a QR code reader.  Nearly all readers are free, as are the QR code generators necessary for making them.  Newer smartphones are coming with a QR code reader already installed.  In the future this may well be standard delivery for any smartphone with a camera.

The code is a matrix barcode that contains several machine readable areas required on each QR code to make it work.  For the better part of their history, these appeared as black and white, square barcodes, nondescript and yawn-inspiring.  Since size only matters to a small degree with these codes (they can’t be too small), they could easily be mistaken for a misprint or an ink blot.

And honestly, the first iteration of these codes pointed to nothing, or next to nothing.  An ad here, a line or two of text there, and that was about it, at least in this country.  Which leads to another reason why QR probably did not catch on quickly here: why bother?  If a website is available, why not give the URL and forget about another intermediate step?   Frankly, this is still a question for many when they look into using QR codes.  Furthermore, the fact that there are numerous QR code generators requiring multiple code readers also conspires to create user lethargy. Users rightly complain that they have to load too many QR code readers to read the codes out there. But that, too, is changing, and not many years hence, one code reader may read all QR codes — or at least the bulk of them.

But today’s QR codes aren’t your grandmother’s barcodes, or rather, your older brother’s, since they’ve only been around just over a decade and half.  Because QR readers allow for a 30% tolerance, QR codes no longer have to be boring.  Today’s codes are colorful, stylish and even attractive.  Furthermore, they can be used extensively for branding.  What Andrew Gossen of Cornell calls “design QR codes,”  today’s codes are also versatile and can be displayed just about anywhere: on coffee mugs, in magazines, newspapers, websites, t-shirts, even billboards.  Of course, not all of these locations would be germane to a QR code display, but this list only touches the surface of their versatility.

So why should libraries be interested?   It must be said that some libraries already are and are employing them in many ways.  Even so, QR codes have been slow to catch on the U.S. and slower still in most libraries.  But libraries ought to be interested in them.  As smartphones continue to proliferate and students continue to use them almost exclusively, getting in touch with the main, or a sizable part of your, clientele is essential.  And getting in touch with them means making contact with them through smartphones.  Branding applications for your library are limited only by your imagination to employ them.

For example, you could add videos to your site and direct patrons to them via QR codes.  Or, you could supply patrons with minimal information and then direct them to fuller explanations via QRs.  Obviously, the codes could be added to any handout in any sort of instructional setting to provide more information and/or explanation.  If your library has a video about how to use your collection or a welcome to freshmen from your dean or director, a QR code could be used to point your students to it.  A QR code could be placed strategically in your materials (or even around your library) to provide users with that information when they need it, and when a librarian is not around.  Moreover, you can place these codes all over your campus so that students are never out of touch with your library, even, and especially, when they are nowhere near its physical location.  The list of QR code uses really is endless, and Robin Ashford has provided a fairly extensive one here.  For more non-library uses that could be adapted for library use, check out the multiple employments online (Facebook: search QR codes; Twitter, #qrcode, for a hosts of others).

What I find fascinating about them is their unlimited ability to brand your library at almost no cost.  Design QR codes can be fashioned in many attractive and eye-catching ways, and this tip sheet provides advice on what and how this can be done to make these codes more appealing.  To see what others have done to jazz up these codes, this article gives you an idea on just how varied these codes can be made to appear.

Is it worth the effort?  Why not try them out and see?  Every library doesn’t function the exact same way, and every new tool will not work in every library.  But QR codes are easily adapted to a pilot study.  Once you’ve tried them, you may find that your users cannot live without them.  Besides, they generate interest in what you’re doing—even if it’s only for a few weeks or months—why not give them a chance?

Imagine for a moment that you branded your library in this way and then provided that code on your letterhead, your mugs, library cards (or facsimile) and directed any user to more information about your library’s services, staff and collections, whether these patrons were in your library, in the student center, or even at the local grocery store.  Granted, the over-40 crowd may look as clueless as Penny at them at first.  But your under-40 crowd will be savvy about them as Sheldon.

Your over-40 crowd will get there soon enough.

Due to popular demand, we're extending the Early Bird Discount for in-person registration by one week to Friday, September 17. We asked several attendees, speakers, and exhibitors to share their plans for attending the conference, and what they're looking forward to...