The International Standard Book Number, most commonly known by its acronym ISBN, has been among the most successful and widely-adopted publishing standards since it was launched in the UK during the 1960s. There are more than 140 national ISBN bodies, and the ISBN has been used to identify more than six million items of varying sorts around the world.

However, like all things impacted by the expansion of digital information, the ISBN system is increasingly being strained by the proliferation of electronic books. The problem would seem on its face to be a relatively simple one: how and when do you uniquely identify an eBook? But because of the transformative nature of digital information, the production cycle, supply chain, and final outputs can be quite different for eBooks than in traditional print publishing. 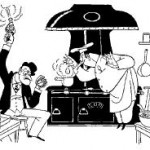 In the print world, there is a fairly straightforward distinction between versions of the same content. We knew, for example the difference between a hard and soft cover, a large-print, and a Braille edition. The publisher has planned in advance for these editions and is in control of the production, including the assignment of ISBNs. However, with eBooks, the publisher often creates a generic file, perhaps in EPUB format, which is then provided to various distributors. The distributors may make further changes to the file before they offer a final product for sale. For example, Amazon may convert the EPUB file to the Kindle format and add digital rights management (DRM) code. The question is whether this transformation constitutes a new format, at what point does that transformation require a new identifier, and who is responsible for the identifier assignment?

“Each different format of an electronic publication (e.g., ‘.lit,’ ‘.pdf,’ ‘.html,’ ‘.pdb’) that is published and made separately available shall be given a separate ISBN.”

However, there remain some important questions, even debate, about the implementation of this in the real world.

Let’s start from the most basic principle that we identify things in the supply chain to facilitate commerce and the management of the product — be that physical or digital — through every step of production, distribution, and sale. Such identification is also important to the end users who often use an ISBN to be sure they have purchased the correct edition. If you are visually impaired, for example, the difference between a standard-sized print and a large-print or Braille edition could mean the difference between being able to read the book or not.

Similarly, if you purchase a Kindle edition of a book from Amazon and hope to read that file on your Nook device, you will likely be disappointed because of the differences in the two file formats or the DRM encoded in the file. If you wanted high-quality, detailed page-layout in your file, a pre-formatted PDF might be more suited to your expected reading experience than an EPUB file. Finally, even in publicly available scans of files that lack DRM, the quality of the resolution in a scan might be different from one supplier to another, and one can envision situations where these differences are important, if not critical, to the end user’s experience. If all of these versions have the same ISBN, there could be considerable confusion in exactly which product is which by distributors, by online or bricks-and-mortar book stores, and ultimately by the end user. As reading devices proliferate in the market and eBooks become widely available from multiple sellers in multiple formats, lack of easy identification of the variations will result in both user dissatisfaction and increased costs to suppliers — from added customer support needs, for example.

This is not unlike the problems that the journal supply chain underwent in the mid- to-late 1990s, when the rules for the assignment of ISSN numbers were unevenly applied to electronic versions of print journals. Some publishers would assign the same ISSN to both print and electronic versions, while others would assign a different ISSN to the electronic edition. It wasn’t until the revision of the ISSN standard in 2007 (ISO 3297:2007) that the assignment of unique ISSNs to e-versions was made mandatory, and a system, the Linking ISSN or ISSN-L, was proposed to link all the versions of a title — print and electronic. Digital book delivery is currently suffering from the same loose application of ISBN rules.

One of the difficulties with eBooks and ISBN is that in the print supply chain the publisher creates the different versions and assigns the ISBN. With eBooks, the publisher frequently passes on a generic file and the various formats are produced by someone else further down in the supply chain. These entities, such as distributors and aggregators, have never been in the “business” of assigning and managing ISBNs. Last summer the International ISBN Center adopted the policy that if a publisher has not or does not want to assign and manage the separate ISBN numbers for each variant of an eBook, then a distributor can do so. Last fall, some distributors began assigning ISBN numbers for eBook products on behalf of publishers. This, however, introduces the new problem about which entity owns and manages the canonical source of metadata about a book. Many would argue that publishers should be the ultimate source of verifiable data about a book. There are already known issues about the quality of publisher-supplied data, which were highlighted in the report that NISO published last summer. (See the white paper, Streamlining Book Metadata Workflow available from: http://www.niso.org/publications/white_papers/StreamlineBookMetadataWorkflowWhitePaper.pdf.) Increasing the number of entities with responsibility for creating and delivering book metadata could make things even worse.

Another aspect to this situation is the use of the International Standard Text Code (ISTC) standard (ISO 21047:2009) and its relation to the ISBN. The ISTC identifies the unique content of a work rather than its various formats and provides the linkage of different manifestations of the same content. For example, the first ISTC was assigned to Charles Darwin’s On the Origin of Species. This text has been reprinted by numerous publishers in various forms, both print and electronic, since it was first published in 1859. A search of the WorldCat catalog found 281 different editions with Charles Darwin as the listed author, with the latest edition appearing in 2009. While few books have this many editions, in today’s digital environment, if each version is unambiguously identified (presumably with unique ISBNs), it’s very likely that every single title published today could have at least a dozen different versions and an equivalent number of ISBNs. The ISTC will be the tool that links these different versions together, both for discovery and collection management. On the publisher side, the ISTC also assists with rights management. If the ISBN is used consistently for disambiguation, the ISTC can provide the umbrella framework for all of the multiple product references and could help to streamline metadata creation and improve its quality. The ISTC standard was published in early 2009 and is currently being used by a few publishers but needs to gain wider adoption to be broadly useful. Additionally, best practices need to be adopted regarding the sharing and consistent application of metadata between the ISBN and the ISTC.

The International ISBN Agency recently released a white paper (http://isbn-international.org/news/view/29) describing the problems of ISBN assignment to eBooks, emphasizing the need for consistent practices for assignment of ISBNs, and recommending some solutions. From the perspective of a centralized and globally adopted system, ensuring the consistency of the system’s application is paramount. This applies not only to different formats, but also to sub-items, such as chapters or other fragments of works, when these items become part of the supply chain. The paper also suggests that there might be a need to identify the generic publication file produced by the publisher that is then used for further re-formatting and distribution. The music industry has such a system in place for the original track, which can then be placed on a variety of albums or even sold separately. This original track — defined as “an abstract entity representing a bundle of one or more Digital Resources compiled by an Issuer for the purpose of electronic distribution to individual consumers, directly or through intermediaries” — is identified using a Global Release Identifier, or GRID. The GRID standard (http://www.ifpi.org/content/section_resources/grid-standard.html) clearly states that “the Release is not itself a Product.” The International ISBN Agency is now discussing with various stakeholders whether a similar system of using generic eBook release identifiers is both feasible and of value.

Although the digital distribution of content has been gaining momentum for more than a decade and a half, the eBook is still in its relative infancy. But eBook production is growing faster than its predecessors, such as the e-journal. As a result, the problems in the supply chain are getting out of control. We need to act quickly to develop a consensus solution. If you’re a stakeholder in this arena, the International ISBN Agency (http://isbn-international.org/) and the International ISTC Agency (http://www.istc-international.org/) are good places to start.